Sheepherding is one of the main sources of income here in the Middle Atlas mountains. The majority of Moroccan sheep are wooled thin-tailed sheep and are used primarily for meat production. Wool-production for Morocco

According to a report by the Food and Agriculture Organization of the United Nations, "the Atlas and Rif mountain types (previously known as Berber) are the most ancient and primitive sheep in Morocco, as illustrated on rock paintings of the Stone Age."

These sheep dot the countryside, from the coastal plains through the Atlas Mountains. It would not be a normal day in Morocco if you did not see several herds grazing along the side of the road. 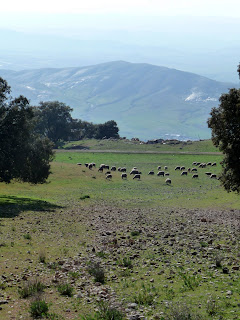 I was on the lookout for Barbary Apes which live high up in the cedar forests surrounding Azrou, but instead, all I found were these flocks of sheep on the picturesque mountainside.

Sheep rearing and shearing is so important in these parts that when natural environmental disasters occur, the villagers often tally the number of sheep deaths alongside the number of human deaths. While shearing does occur here and most women know how to card and spin their own wool, the larger cooperatives that I work with tend to buy their wool, already dyed, from large companies in either Casablanca or Rabat.

In several parts of the country, such as the southern regions near Taznakht and the eastern reaches of the Beni Ouarain tribe, it is more common to see thicker pile rugs made out of natural wool. These rugs often have three colors: white from white sheep, black from the black sheep, and gray which is made by carding and spinning the black and white wool together.